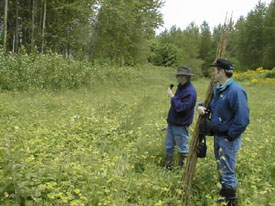 Editor's Note: The following is adapted from a consultant's report concerning the unique agricultural buffer plan in Skagit County, WA which was drafted in response to the Washington State Growth Management Act’s attempts to protect "critical" habitat for salmon congruent with the Endangered Species Act listings of Northwest salmon. See the April 2000 issue of the Temperate Agroforester for related stories.

A buffer may be defined as an area that protects another area from negative impacts or influences, a kind of neutral zone of insulation. In agricultural areas buffers may be seen and defined from two perspectives: as a buffer o­n the effects of agricultural practices o­n adjacent water bodies, and as a linear habitat zone surrounding streams and creating a microclimate similar to natural conditions. Currently, there is a popular environmental belief that the best approach to the conservation of riparian areas is passive management, leaving vegetation to re-establish itself through natural processes. In forested areas the natural re-establishment of vegetation connected with streamside forested leave strips maybe a practical and viable solution. However, this approach does not well serve salmon habitat in areas thoroughly altered by agricultural practices or other human development.

The amount of time required for natural systems to "restore themselves" may leave biotic communities and critical salmon habitat compromised and inadequately protected for many decades. Given the immediacy of the concern for salmon stocks in the Pacific Northwest, and the extent of human development that has taken place, it is not prudent to leave protection and recovery to chance nor to the extended time frames required for natural processes to reestablish the necessary functions for salmon habitat. Strategies for habitat enhancement can be accelerated and directed through appropriate and timely management activities, delivering desired ecological goods and services in less time o­n less land, and with more certainty. There is a significant investment cost in successfully implementing these strategies, with maintenance that must be supported over time until stand establishment. Although we would all like to o­ne-time plant riparian areas with mixtures of the right species to form a permanent stand, and have it turn into a self-sustaining native plant community, this is highly unlikely without effective post-planting support.

Active management of the buffer vegetation using silvicultural and agricultural techniques can accelerate the vegetative process beyond what a passively managed agricultural riparian buffer program would produce. The Skagit Managed Buffer Plan uses a managed successional pathway to reclaim ground by creating immediate shade and competition for existing invasive riparian vegetation, thinning this densely planted deciduous "cover crop", and following with long-term conifers and other native or site appropriate species. At a larger scale riparian silviculture, still in its infancy, can utilize rich moist bottomland soils for perennial tree crop production, while enhancing riparian functions and in turn supporting salmon recovery. Agricultural buffers often simply concern themselves with nutrient filtration and sediment control. Channelized sheet flow is the most important weak link in nutrient and sediment control programs, and active monitoring and immediate remedial actions can address these "leaks."

Riparian silviculture can provide a suite of functions, leading up to large woody debris (LWD) production. Common definition of buffer width is derived from LWD sourcing through random recruitment. Since the likelihood of a tree falling naturally into a stream (in a way that directly benefits aquatic habitat) is low, the largest amount of land that can possibly contribute to LWD sources is seen as necessary; thus the 100 year site potential tree height (SPTH) has been developed as the buffer width standard to allow for this natural recruitment. However, if trees are directly placed into the stream, and done so in specific ways, the area needed to produce sustainable supplies of LWD is reduced dramatically. This is o­ne of the basic premises of the Skagit Managed Buffer, a process we have termed "conscription" as opposed to natural, passive recruitment.

To work optimally, these managed buffers must be well planned, established, maintained and monitored for effectiveness. An effectively managed buffer is particularly well suited to agricultural lands as they can usually be integrated with regular farming practices (e.g., mowing, weed control, pruning) and can even feasibly contribute to farm income without undermining their protective function and thus eventually perhaps cover the cost of management. "Regulatory buffers", those areas simply declared off limits to landowner use will not attract the kind of support of a more incentive-based system. For farmers to see the values of "riparian farming" the process must be credible and supported by the general public whose broader ecological goals riparian protection serves.

Among the most important recognized functions provided to the aquatic system by the vegetation in riparian areas are: shade, streambank stability, sediment and chemical filtration, and input of large woody debris and organic matter. All of these functions are influenced by the species composition, structure, size and age of the trees, shrubs and understory plants in a riparian corridor. In riparian zones that border intensively-managed agricultural land, riparian areas are often heavily colonized by invasive plants such as blackberry, Japanese knotweed, or Reed canarygrass. These plant communities may actually support a number of functions pretty well, but the provision of LWD through development of mature trees, which drives so much riparian restoration planning, can be nearly impossible in these marginal agricultural jungles.

Active management of riparian buffers offers some important advantages that will hasten and strengthen their ability to perform ecologically-beneficial functions. For example, strategic placement of large woody debris and other large substrate elements into stream channels immediately provides structural diversity, hydraulic complexity, and refuge from predators for fish. Management for coarse woody debris production is facilitated by tree thinning in the riparian zone encouraging the optimal development of large trees. Appropriate spacing of trees including thinning and pruning encourages canopy development that allows for optimal shade and production of sustainable supplies of leaf and needle litter. The long term goal is a connected network of established riparian buffers with a combination of herbaceous and woody plant species.

It must be remembered that the purpose of a restoration effort is to establish, as quickly as possible, functional riparian buffers along stream reaches where there currently are not well-established buffers. Actually, "restoration" is rather a misnomer, since we are not trying to re-create pre-European conditions; instead we are looking for a new equilibrium that buffers the effects of cropping systems from streams that are increasing in habitat complexity and resilience. Concurrent is the concept of re-establishing ecological processes, which will sustain the desired conditions and pathways. In highly modified agricultural areas, the goal is to foster processes that will deliver desired functions and support sustainable and innovative agroecosystems. It is unreasonable to expect that restoration will ever lead to the restoration of the riparian ecosystem that existed prior to agricultural development. In many cases, the species composition, abundance, and diversity in managed agricultural zone riparian buffers will vary significantly from that which characterized the original riparian community. There is little empirical field data to guide us toward such an objective as it pertains to salmon, and the problem is confounded by larger processes and trends (e.g., ocean and climatic conditions), not the least of which is chronic over-harvest. There is a question as to whether old growth forest conditions were even the most conducive to salmon productivity. For example, autotrophic system components, driven by sunlight, are more net productive than shaded reaches.

Enhancement of agricultural riparian areas via active, focused buffer management can be a proactive and fairly straightforward approach to ecological development of interactive aquatic and terrestrial habitat. Management strategies should be designed to maintain desired conditions where they are currently adequate, and to accelerate riparian plant community trajectories where processes are currently impaired. Adaptive management is an approach that implements a range of conditions and controls, and responds to system changes through seeing management as o­ngoing scientific experimentation. How rapidly any of these habitat-enhancing efforts will impact salmon productivity in watersheds of the Pacific Northwest remains to be seen. It has never been done before at the scale envisioned by the Endangered Species Act, and is indeed a grand experiment.

This article originally appeared in the October 2001 issue of the Temperate Agroforester.