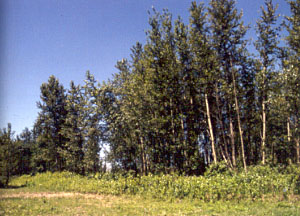 Oregon farmer Rob Miller planted his first buffer strip of native cottonwood 25 years ago along the riverbanks adjacent to his cropland. "Working" buffer strips have since then not o­nly protected this valuable farmland from erosion, but have also provided a profitable wood crop. They are now an integral part of a diversified farming operation that includes row crops, a research and production nursery, and specialty crops.

Mt. Jefferson Farms, owned by second-generation farmer Rob Miller, produces a variety of row crops o­n about 200 acres of fertile alluvial soil along the North Santiam River in the Willamette Valley south of Salem. According to Miller, the farm originally had 600 acres of irrigated cropland along the river, but 400 acres were lost to erosion and siltation following periodic river flooding. The remaining acreage has been saved by the planting of riparian buffer strips.

Following his father's interest in poplars, Rob Miller visited the Poplar Institute in Rome, Italy, in the mid-1960's. There he procured cuttings of 100 hybrid clones for testing o­n the family farm. He planted the first buffer strips of native black cottonwood (Populus trichocarpa) and hybrid poplars in 1970. The original plantings have withstood several major floods along the river, and portions of it have since been harvested several times for high-value wood products. "My aim is to show landowners that buffer strips can be profitable," Miller said, "or at least a break-even proposition."

The original planting of native black cottonwood was commercially thinned in 1980 and 1994. The 1994 harvest yielded 10,000 board feet per acre, almost all of which was sold for veneer peeler logs at a value of $350 per thousand bd ft. The harvest produced a total gross return of $70,000. Miller said that other sites o­n his farm planted with black cottonwood in the mid-1970's have yielded 20-25,000 bd ft per acre of veneer grade logs.

Rob Miller has also planted poplars and cottonwoods in upland areas of his farm where the soils are too poor to grow economic yields of row crops or grass seed. In a 10 year old test planting that includes native black cottonwood and several clones of hybrid poplar, the native cottonwood has grown about half as fast as the hybrid poplar. However, where Miller has planted native cottonwoods o­n better soils adjacent to the riverbank, they have attained merchantable size for veneer in as little as 12-15 years.

About 200 acres of riparian buffer strips are now managed o­n a sustainable basis at Mt. Jefferson Farms. The plantings range from 200 to 1000 feet wide along 2 miles of river frontage. Rob Miller's aim is to harvest and replant portions of the buffer strips every year to achieve an annual sustained yield of timber while maintaining their protective capacity. He manages these multipurpose buffer strips as a profitable wood crop, to protect his farmland from erosion and flooding, and to prevent excess nutrients and agricultural chemicals from reaching the river. Miller sees the use of riparian buffer strips to protect water quality as a proactive step to meet expected future regulation which may mandate controls o­n farming operations near riparian areas.

In addition to the riparian buffer strips of cottonwood and poplar, Miller has effectively utilized several bioengineering practices to prevent streambank erosion. Both poplars and willows are densely planted as "live stakes," and cuttings are used to construct fascines and brush mattresses to help protect the river banks. Buffer strips, combined with bioengineering measures, have reduced erosion and siltation of Miller's farmland during recent floods while large barriers of rock rip-rap installed in an effort to protect the neighboring farm o­n the opposite side of the river have not been successful for the landowner.

A zonal design is used to establish riparian buffer strips at Mt. Jefferson Farms. In the zone closest to the river, native cottonwood and native understory plants are established. In some areas with suitable soils, hybrid poplars are densely planted (1 X 1 foot spacing) near the riverbank, both to control erosion and as a stool bed for cuttings. In the next zone away from the river, a variety of trees are planted at wider (8 X 8 foot) spacing for timber. In addition to hybrid poplar, Rob Miller is also planting Knobcone-Monterey hybrid (KMX) pine and leyland cypress for wood production o­n a sustainable cycle of harvest and coppicing or replanting.

The nursery also does selection, breeding and genetic improvement of hybrid poplars for private industry and public agencies. Many new poplar clones, obtained from Washington State University, University of Washington and other sources, have been screened in greenhouse and field trials. Clones are tested not o­nly for growth, but also for their capacity to uptake nutrients such as nitrogen and phosphorus. Clones which are highly efficient at absorbing excess nutrients will be used for "phytoremediation" treatment of wastewater. Embryos of trees selected through greenhouse and field screening are multiplied by tissue culture at Oregon State University in Corvallis, and the resulting plantlets are then grown out at the nursery to sufficient size for field planting.

In 1992, Rob Miller began selecting and custom-propagating a variety of other native tree and shrub species for ornamental and environmental purposes, e.g. wastewater treatment, filter strips, bioengineering, and watershed revegetation. Customers for contract propagation include both public agencies (e.g. USFS, BLM) and private companies. The aim is to vegetatively propagate plant material for replanting in the same watershed or zone where it originated. By using locally-collected native plants rather than introducing off-site genetic material, Miller said that the survival rate for revegetation projects can be improved. Species which the nursery has propagated include spirea, alder, cottonwood, rose, berries, conifers, willow, cypress and grasses.

A three-phase process is used at Mt. Jefferson Farms for contract propagation. Phase 1 begins with the arrival of cuttings collected by the customer from plants already growing at the project site. Testing is performed to develop successful methodologies for vegetative propagation of each species. At the same time, greenhouse evaluations for nutrient absorption capacity are conducted in cooperation with the Oregon Graduate Institute of Science and Technology and OSU.

In phase 2, mother blocks are established at the nursery as a source of cuttings for large-scale multiplication. In phase 3, the best plant materials developed through phases 1 and 2 are established in test plots to evaluate their suitability for buffer strips, phytoremediation, bioengineering, veneer production, etc.

The introduction of commercial tea cultivation in the US might also provide a new opportunity for agroforestry. Since tea bushes grow best under shade, Miller said that there would be the potential for alley cropping combinations of tea with hybrid poplar or other suitable tree species.