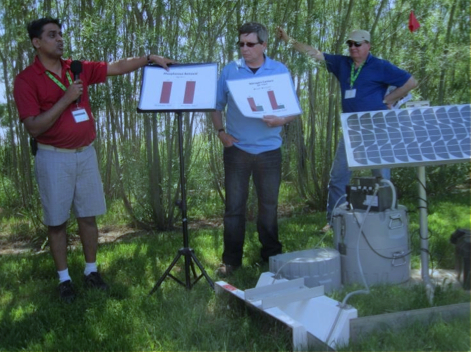 Over 100 scientists, land managers, producers and others took in the 13th North American Agroforestry Conference (NAAC), June 19-21, 2013, at the University of Prince Edward Island in Charlottetown, Prince Edward Island. Delegates came from all over Canada and the US, with a special welcome for participants from Europe and Morocco. Some people were quite unfamiliar with Prince Edward Island at first but went home with the letters “PEI” rolling effortlessly off their tongues and with a new- found appreciation of the charm of Charlottetown and the beauty of PEI’s countryside and coastline.

Agriculture and Agri-Food Canada’s Science and Technology Branch was a partner in presenting this 13th biennial conference of the Association for Temperate Agroforestry (AFTA). The first one dates back to 1989, when it was hosted by the University of Guelph in Guelph, Ontario.

For delegates, the conference’s field tour was a great opportunity to see the diversity of agroforestry projects in PEI and to enjoy the beauty of PEI. “Agroforestry takes different forms in different parts of Canada,” said John Kort, an AAFC Senior Agroforestry Researcher at Indian Head in Saskatchewan. “During our bus tours, we got a chance to see how trees are integrated into the agricultural landscape in Prince Edward Island.”

Poplars, willows and other tree and shrub species have been successful in protecting biodiversity and water quality in an agricultural setting, as windbreaks and riparian buffers.

Delegates also heard how trees in an agricultural landscape are a source of wood, fruit, nuts, syrup, biochemical and woody biomass for bioenergy and bioproducts, contributing environmental and economic benefits simultaneously.

“The conference was a great venue to exchange ideas,” said Chris Pharo, Regional Sustainable Agri-systems Manager with Agriculture and Agri-Food Canada in Kentville. “People are very interested in what we are doing and some were surprised at the variety of outreach projects we have underway in the Atlantic.”

Scientific posters explained how trees and shrubs are being integrated into the agricultural landscape all over the world and providing many environmental benefits.

The conference included several European speakers who discussed agroforestry in a European context.

In his presentation, Dr. Jacques Baudry, senior scientist with the National Institute for Agronomic Research (INRA) in France, who is based in Rennes, showed how the role of trees in the ecology of the agricultural landscapes of Brittany and Normandy in France had evolved.

Agriculture and Agri-Food Canada soil scientist Dr. Marie Boehm talked about agricultural greenhouse gases and how trees can help to reduce their emissions.

Dr. Shibu Jose Director of the Center for Agroforestry at the University of Missouri, outlined the state of agroforestry in North America.