Agroforestry as Observed by the DeSoto Expedition of 1538

Despite our understanding that perennial agriculture has been practiced globally for millennia, understanding of North American indigenous agroforestry systems remains poor.  It is a widely-held belief among the public that indigenous North Americans limited their agricultural production to annual crops, while opportunistically foraging for the fruits of perennials in the matrix of wilderness surrounding their settlements.  However, clues from early European contacts with indigenous civilizations of the modern day United States, as well as corroboration from archaeological evidence, point towards an intensive, and widespread perennial polyculture managed in the vicinity of permanent settlements. (Abrams & Nowacki 2008)

One potential glimpse into these systems comes from the 1538 expedition of the conquistador Hernando De Soto. This journey represents one of the most significant windows into American Indian cultural practices as they existed prior to European colonization of the continent. Following his participation in the conquest of the Incan empire, Soto left Spain with approximately 700 men for an ill-fated, 4-year expedition would range as far north as South Carolina, west across the Mississippi River, concluding with the death of Soto and an escape by the survivors via the Gulf of Mexico (Figure 1). Along the way, the Spanish traveled through territories of many nations, securing provisions and safe passage through diplomacy and violence (Galloway 1997). 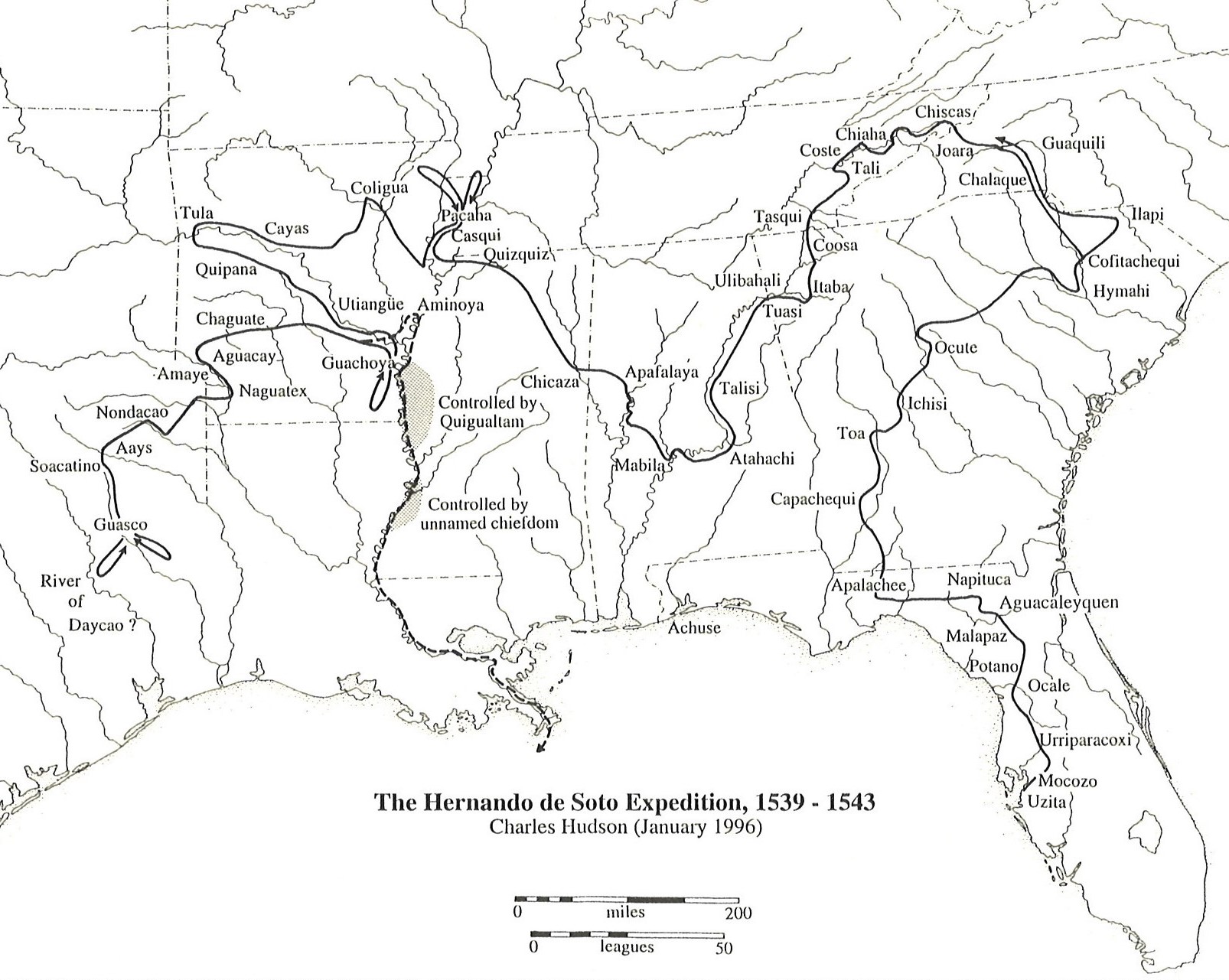 Within the available narratives by survivors of the expedition, two main categories of evidence emerge for broad-scale perennial cropping patterns that served as a staple food source for large populations. A limited selection of these observations are excerpted below (Clayton et al. 1993).

The first are descriptions of the landscape that the party travelled through, showing evidence of cultivation and care, despite appearing wild to the soldiers’ eyes observing them.  These open grown forests, composed of crop tree species, with little undergrowth, may indicate an agroforestry system where crop trees are encouraged to grow within agricultural fields, whether through selective clearing, or systematic planting and cultivation.

The second category is of provisions obtained directly from Indian villages, whether via force or gift, that indicate an abundance of tree crop produce:

By the sixteenth century, American Indian culture in the American Southeast had entered the Mississippian epoch (see Figure 2 for Epochal timeline), marked by the development of permanent villages, continuously inhabited for hundreds of years (Abrams and Nowacki 2008). This development away from nomadic societies, marked a distinct shift in the landscape that is visible in the archaeologic record, where it has been observed that food-related detritus becomes dominated by plant materials, chiefly hickory shells, as opposed to animal remains (Abrams and Nowacki 2008).

During this period, archaeologists and ecologists have found evidence for wide-ranging management of forests that may explain the observed phenomenon of relatively higher proportions of nut trees of the Carya, Juglans, and Quercus genera in the vicinity of settlements. Though research into the practice of this management is limited, and specific strategies may now be lost, it is theorized that without metal tools for land clearing, slash-and-burn style swidden agriculture is not believed to be practical for these people (Fritz 1990). Instead, permanent agricultural fields were likely established via girdling and of unwanted trees and maintained with low-intensity burning, only fallowed for short periods (Abrams and Nowacki 2008) 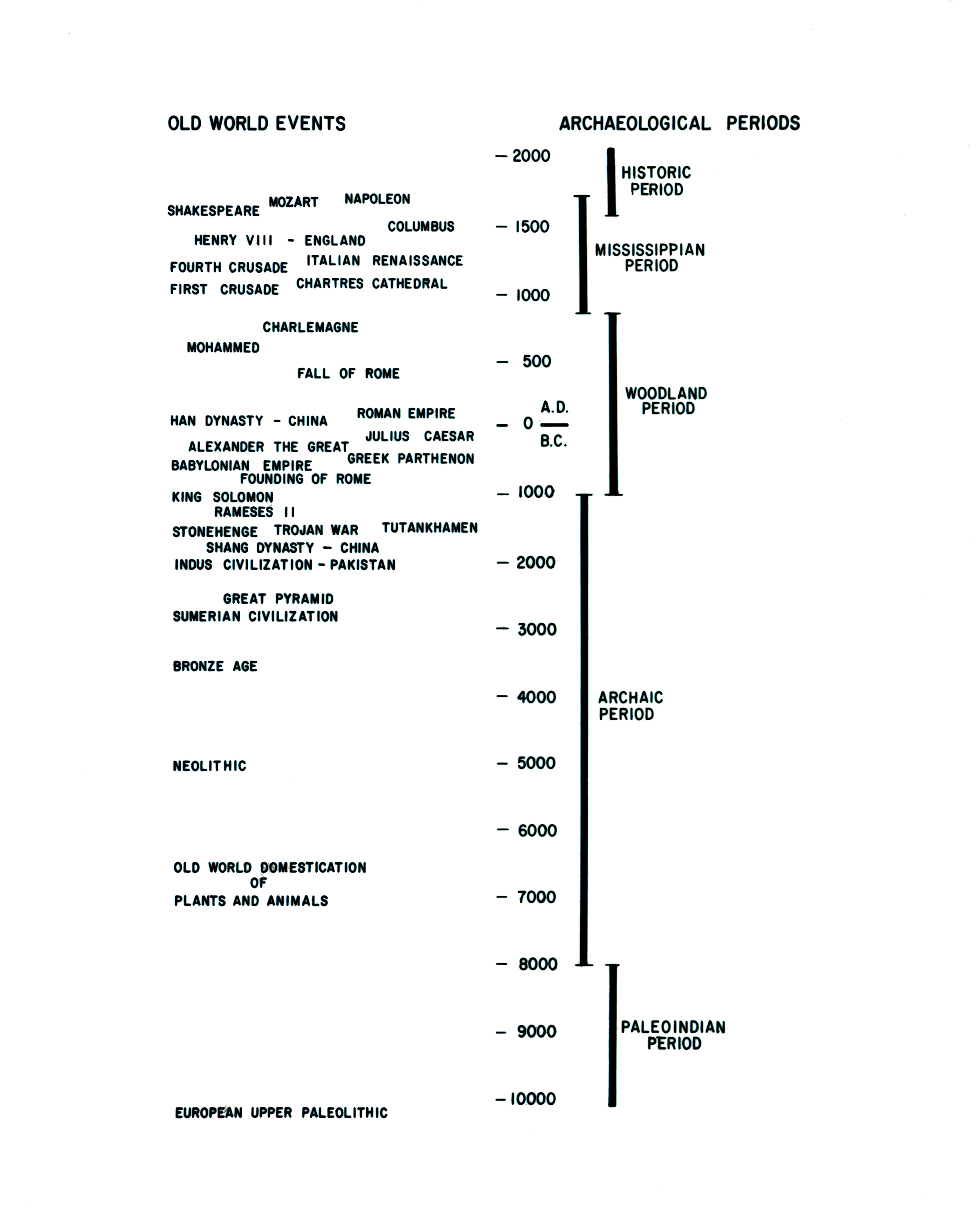 As we continue to seek greater understanding of agroforestry systems for temperate regions of the globe, the clues available in the archaeological and historical record may provide precedent for prior establishment of such systems. By seeking greater understanding of systems developed over thousands of years in North America, and further studying the effect of Early Americans on forest ecology, we may enhance our argument and evidence for the feasibility of a shift back toward perennial agriculture.

Hudson CM (1997) Knights of Spain, Warriors of the Sun. University of Georgia Press