Maple Syrup Production in the Pacific Northwest: Adapting an Old Practice to a New Region

Maple syrup production is one of the most popular examples of forest farming and agroforestry in the U.S. and Canada.  However, commercial production of maple syrup is almost entirely concentrated in the eastern region of these two countries and has historically been defined by the native range of the sugar maple (Acer saccharum). True to its name, sugar maple sap has a sugar content 2-3 times more than other maples (at 2-3%).  This higher sugar content means there is less water to remove through boiling and makes it an ideal species for syrup production.  However, producers in these areas also tap other native maples [e.g., silver maple (Acer saccharinum) or red maple (Acer rubrum)], which have lower sugar content but still produce valuable sap (Peters et al. 2020). The expansion of maple syrup production beyond sugar maple begs the question: which maples in other parts of the country are suitable for syrup production?  All maples produce sap with sugars (sucrose) that can be reduced to syrup and individual species may have unique, marketable flavors. The Pacific Northwest is known for its conifer-dominant forests but there are several native deciduous trees, including maples.  Bigleaf maple (Acer macrophylum) occurs naturally west of the Cascade Mountains from Northern California to British Columbia. It forms a significant component of forests in western Oregon and Washington.  Bigleaf maple is typically associated with river terraces and floodplains but also grows on upland sites; best growth occurs on well-drained soils with sufficient moisture and soil depth. Except for specialty wood products like burls for instruments or artisan furniture, the timber value of bigleaf maple has historically been very low.  As a result, the species has generally been treated as a nuisance over the last century and its population has been reduced in favor of commercially valuable timber species like Douglas-fir. However, bigleaf maple will vigorously stump sprout following cutting and can be a dominant species in areas where post-logging reforestation efforts with conifers were unsuccessful or not implemented. Non-industrial private forest owners, who were less likely to use herbicides to control bigleaf maple sprouting now often have forests with significant maple components.  These landowners are also most likely to experiment with forest farming practices like maple syrup production.

Sap from bigleaf maple has a lower sugar content compared to that of sugar maple, typically ranging between 0.7-1.5%.  This means producers will need around twice as much sap to produce the same amount of syrup.  However, with advances in specialized vacuum tubing systems and reverse osmosis it’s possible for a producer with commercial interest to offset the lower sugar by acquiring and processing larger volumes of sap.  Bigleaf maple does also have some advantages over sugar maple.  It has fast juvenile growth and can reach a tappable size quickly.  It also produces prolific vegetative sprouts and responds well to coppice management (Burns et al. 1990).  This can be utilized to develop multi-stemmed trees with well-established roots which may improve sap yield per tree.

The mild climate of Pacific Northwest presents potential advantages and challenges as well. Sap flow occurs in maples during freeze-thaw temperature cycles.  In the eastern U.S. freeze thaw cycles are reliably timed during the transition from winter to spring.  The mild winters in the PNW can produce sap flow between November and March when temperatures dip below freezing at night. This longer sap season could mean greater sap production.  However, the warmer temperatures also provide optimum conditions for bacterial growth, increasing the need for and time spent on regular cleaning of lines and collection equipment. 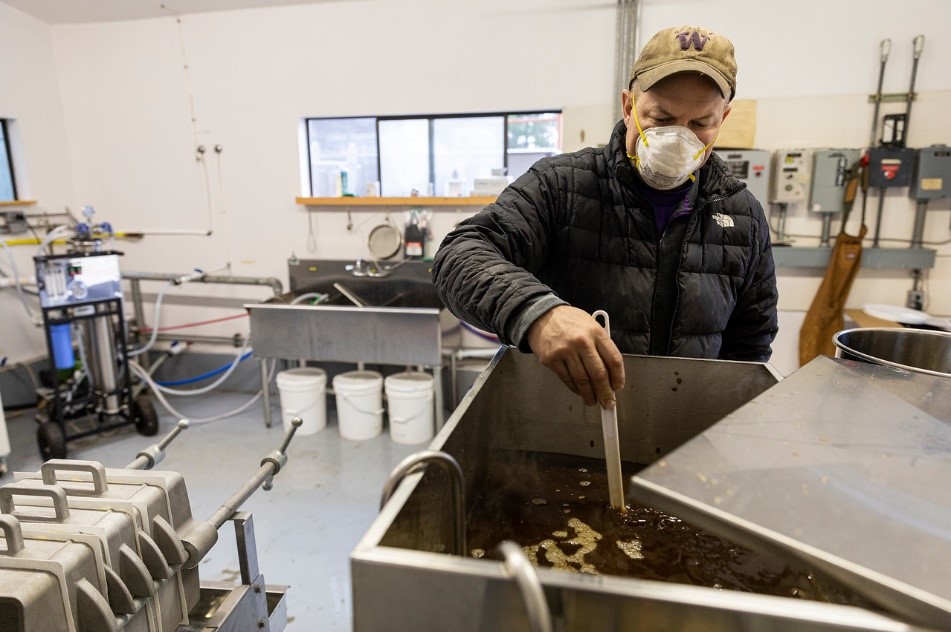 Figure 2. A landowner participant in the UW study learns how to process maple syrup at the University of Washington's Pack Forest (Photo: Mark Stone, UW).

Sap can be collected and processed on a small scale with minimal investment for taps, tubing, and buckets, with the sap boiled to syrup using an outdoor propane stove or homemade wood-fired evaporator. Scale and efficiency can be improved with investments ranging from a few hundred dollars to several thousand. However, most of the supplies and equipment can last many years if properly cleaned and maintained.

Bigleaf maple syrup has a unique flavor profile, which has been described as bolder and more complex than sugar maple syrup. Many people in the emerging bigleaf industry are coming to believe this strongly flavored ingredient has a delicious new role to play in northwest cuisine.  The market for bigleaf maple syrup is relatively unexplored but the few existing commercial producers are experiencing high demand for their products.  This demand far exceeds production.

There is clear potential to grow the practice of maple syrup production in the Pacific Northwest at both the hobbyist and commercial scale, but many questions remain about how best to adapt silvicultural, production, processing, and marketing methods to a new region and maple species.  The University of Washington applied for and received funding from the USDA Agricultural Marketing Service ACER Access and Development Program in 2019 to explore the potential for commercial production in Washington State. Work through this grant will describe bigleaf maple habitat and potential for syrup production across a climate gradient. Research sites were established (2019-2021) on the Olympic Peninsula at Forks, Pe Ell, Bremerton, and Quilcene as well as inland sites from the north in Acme, south to Sultan, Olympia (i.e., WSU Meyer’s Point Environmental Field Station), and Eatonville (i.e., UW Pack Forest).  This range in sites provides an environmental gradient to compare sap production. Sap volume and sugar content is being collected at the stand-level (gallons of sap and sugar content), and tree-level sap production by tree size (liters sap/day). A model describing sap production in relation to temperature and location will be created with the data collected. Except for Forks (on the western most side of the Olympic Peninsula), all sites have seen levels of sap flow that could support commercial production. In addition, each area produces syrups with subtle differences in flavor, similar to how wines vary by region and season. 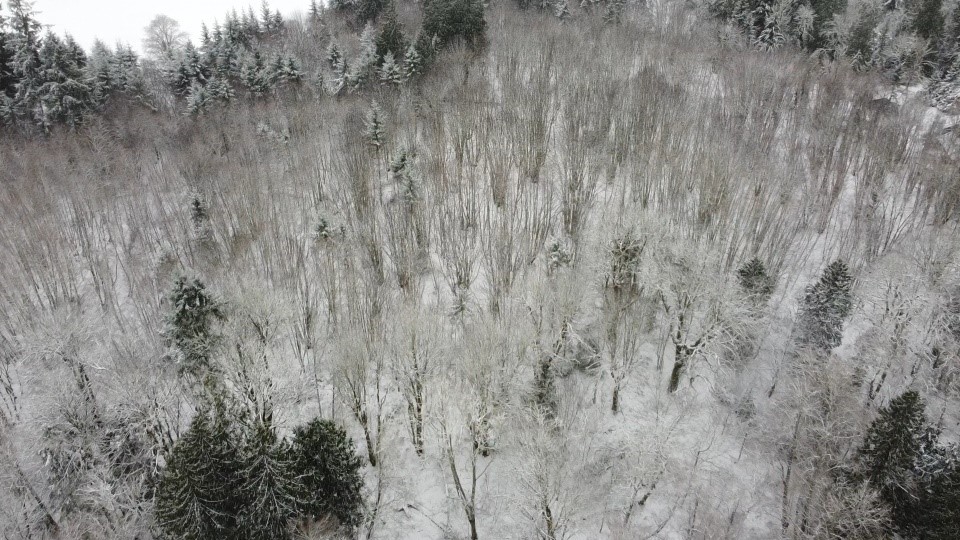 A second objective of the research is to establish field collection and processing protocols in support of small and commercially scaled syrup production. The trials are exploring sap collection with mechanical vacuum and using gravity-induced vacuum with smaller diameter (3/16”) tubing collection lines. The test sites range from between 80 to 700 taps. The processing of bigleaf maple sap into syrup is like that used for sugar maple. Notable differences include lower sugar content and higher concentration of minerals (precipitate as “sugar sands”).  Sap can be concentrated from 1-1.5% brix (sugar content) to 6-8% or more using reverse osmosis, then boiled in a stainless-steel evaporator to a sugar content of 66-67%, where it is then filtered and bottled.

In 2020, Oregon State University also received ACER funding to promote bigleaf maple tapping and processing in Oregon as an economic opportunity for small farms and forests in Western Oregon. The project has focused on creating a peer learning network and supporting landowners by demonstrating and assisting with setups and loaning supplies and equipment to help participants better estimate startup costs for commercially viable production. The OSU project is also advising and assisting with the Oregon Maple Project, a nonprofit that built a sugar shack at Camp Colton outside Portland and is training people in basic sugaring techniques. The goal for OSU is to prop up a hobby culture alongside a commercial industry to promote overall awareness and appreciation of bigleaf maple foods.

Last year (2021), the University of Washington, Washington State University Extension, and Oregon State University submitted a joint proposal and received additional ACER funding to focus on landowner outreach and education.  This included the development of a “community sugaring” program with a mobile evaporator that would allow forest owners to process sap without investments in equipment.  The grant is also funding hands-on workshops and trainings hosted at UW study sites, educational webinars and videos, and scaling up the WSU-owned study site in Olympia for demonstration. As adoption increases, landowners will have the option to enroll in a community science program that will allow them to submit data on their sap collection and processing.  The funding will also support the development of an annual Bigleaf Maple Syrup Conference and Bigleaf Maple Festival alternately hosted in between Washington and Oregon, the first of which will take place in May of 2022. 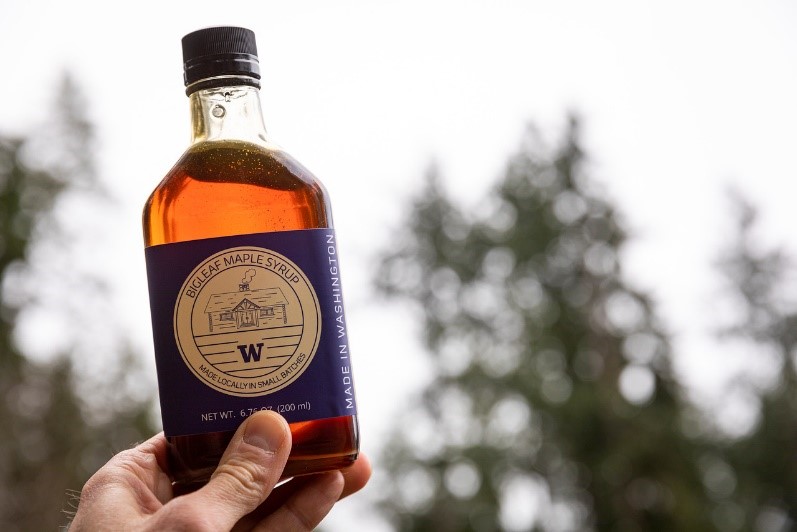 Forest farming maple syrup in the Pacific Northwest is an exciting example of how agroforestry can shift perspectives.  What would historically be considered a low value stand of bigleaf maple may now be seen as a lucrative opportunity that can increase and diversify landowner income.  The efforts underway have yielded significant progress in learning about bigleaf maple syrup production but there are still many questions to be answered.  Existing research and institutional knowledge around producing maple syrup in the eastern U.S. and Canada may not always apply and should be replicated to determine best management practices.  Guidance from programs like the Cornell Maple Program and the University of Vermont Proctor Research Center has been critical to the progress and continued knowledge exchange between maple-based industries will help enhance the understanding and adoption of forest farming as an agroforestry practice.