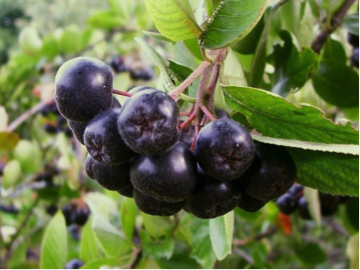 Forester Craig Stange at the Plant Materials Center in Bismarck, North Dakota continues his good work with tree and shrub species for the northern Great Plains. Below are a few highlights detailed in the Center’s recently released 2014 Progress Report of Activities. Besides the species discussed here, the PMC has also been focusing on working with partners on the development of commercial Aronia orchards.

Other species (Scots pine, spruce, hackberry, birch, oak, chokecherry, etc.) are also evaluated.  For details, contact Craig at: This email address is being protected from spambots. You need JavaScript enabled to view it..

From a lodgepole pine progeny test evaluated in 2006, seedlings of six accessions were grown at the Towner (ND) State Nursery for three trial plantings established in North and South Dakota in 2008, using Ponderosa pine for comparison. After six years, lodgepole pine grew as well as Ponderosa pine, although initial survival was not as good. Deer appeared to like both species equally well.

In 2014, lodgepole pine seedlings were offered to field offices in North Dakota, South Dakota, and Minnesota for “on farm” field plantings, and some were also sent out in 2015. The species is expected to do well on well-drained and coarse-textured soils, but it is currently not recommended on heavy-textured soils, based on past trials. Successful field plantings throughout the region could result in lodgepole pine being added to the Field Office Technical Guide.

A 2-acre test planting of 500 lodgepole pine from 25 different seed sources was planted in 1980 by Dr. Richard Cunningham. By 2014, 180 trees had died from fire, crowding and weed competition.

In order to make a useful seed orchard of this stand, it was thinned, lower limbs were pruned and each tree was permanently identified. Low-scoring seed sources were also removed. This will become an important source of seed for future agroforestry plantings in the region.

Dr. Ron Zalesny with the US Forest Service Research Lab at Rhinelander, Wisconsin, has shown that some poplar clones can tolerate salinity as high as 9 mmhos/cm, while most hybrid poplars are affected by soil salinities as low as 2 mmhos/cm.

A field trial was begun near Bismarck, North Dakota to test Dr. Zalesny’s selections (25 cuttings X 7 clones), using Robusta poplar (very sensitive) and Russian olive (very tolerant) as comparison species. The field included 3 ranges of naturally occurring salinity (<4; 4-6; and >6 mmhos/cm), with salinity and soil moisture levels measured throughout 2014. Some clonal differences in early growth were already apparent by the end of the first summer of this 5-year trial.

One of the most common requests from field offices in North and South Dakota is, “We need more tall trees for windbreaks.” Perhaps we have a promising tall tree to meet those needs. Douglas fir has been growing quite well in four distinct stands in North Dakota for 60-90 years and a few younger plantings are doing well at additional locations.

Seedlings propagated by the Towner State Nursery are available for field plantings by districts in the spring of 2015. Further seedlings will be available for 2016.

Though this species does well in our region, its soil preferences are not well-known, but it likely will perform best on well-drained loams to loamy fine sands.

A study, started in 2013, is on-going to establish cottonwood on flood plains that no longer experience flooding. It includes different planting materials and techniques: 6-foot unrooted  cuttings planted via waterjet; 5-foot tall potted trees planted with the bottom of the root ball 4 feet deep;  regular conservation stock, 20-in3 plugs, planted traditionally. As well, a treatment to evaluate the impacts of dense brome (Bromus inermus) was included.

By the end of 2014, most of the 2013 unrooted cuttings had died since the water table was never close to the cuttings at any time of the season. However, the deep pot material exhibited 100% survival the first year, while, surprisingly, the trees covered with fabric to eliminate the brome did more poorly in the second year than the uncovered trees (survival at 63% and 96%, respectively). This was a surprising result that will require further research and explanation. Unrooted cuttings, planted in 2014 were much more successful since the water table was higher.

For more information and publications from the Plant Materials Center at Bismarck: