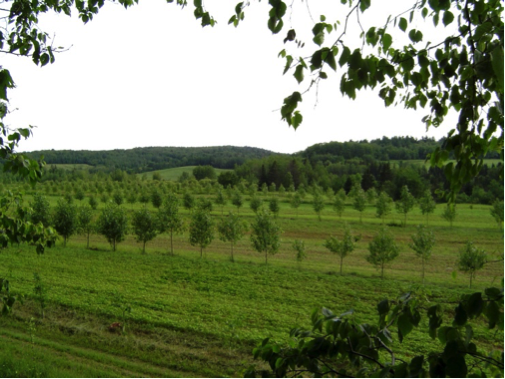 Climate change is expected to affect crop yields in Quebec. A project underway at Laval University has been studying the impacts of tree-based intercropping on biodiversity, hydrology, microclimate and root distribution, as well as yield and profitability, as a way of adapting to climate change.

Root pattern was different between the two tree species with the shallower and more extensive poplar roots being more competitive with crops than those of red oak. However, light was found to be more important to crop yield. Thus, managing tree density and shape could help control light competition. Furthermore, a meta-analysis showed that the right tree species could be a key factor to climate change adaptation.

The density of soil microarthropods was greater under red oak than poplar. Tree-based intercropping, under increased drought, as predicted with climate change, may result in more organic resources for these organisms.

Although conventional agricultural systems gave better crop yields than tree-based intercropping because of tree-crop competition, the total relative productivity of trees and crops was greater in the agroforestry system with a land equivalent ratio (LER) higher than 1. Moreover, the total economic value of tree-based intercropping systems was 2.4 times higher when the value of ecosystem processes such as soil stabilization, carbon sequestration and pollination, were considered.

Simulations using the model predicted that tree-based intercropping would increase the LER under the climate change scenarios, since the productivity gains of trees would compensate for the reduced crop yield which would be much more stable in agroforestry systems.

Thus, the widespread adoption of tree-based intercropping in Quebec could help limit the need for risk management programs, generating savings for the public institutions that finance such programs.

Funding support from Consortium on Regional Climatology and Adaptation to Climate Change (OURANOS), through Fonds vert Québec, is gratefully acknowledged.