Planting with Perennials at Tres Estrellas Organic Farm and Garden

Tres Estrellas Organic Farm and Garden is a 35-year old, 6-acre, organic production and educational farm located in Tecate, Baja California, Mexico, in a mountain valley amidst 240 acres of chaparral and oak woodlands. Tres Estrellas has served as the production farm for Rancho La Puerta Wellness Resort and Spa for over three decades, providing 60-80% of the produce used to prepare three farm-fresh meals a day for 5,000+ international guests annually. The fruits, vegetables, eggs, flowers, culinary herbs and goat milk that are produced on the farm are delivered, recently harvested, multiple times a week to the three commercial kitchens operated by Rancho La Puerta. The permaculture influenced farm incorporates biointensive fruit and vegetable production, agroforestry, agrobiodiversity conservation and animal husbandry to create a living example of ecological agriculture.

Just this past year, in 2021, Tres Estrellas began offering experiential, educational programming, most notable a 4-week course, the “Soil-to-Table Certification Program”. During the program, participants learn how to produce food in a way that regenerates natural resources and protects the natural environment, as well as how to use farm fresh produce to prepare meals and preserve the garden surplus. Embodied in the Soil-to-Table Program is the longtime dream of Sarah Livia Brightwood, President of Rancho La Puerta, to inspire the next generation to care for the environment and become more self-reliant. Tres Estrellas was founded by Sarah when she was in her 30’s, at which time she began planting perennials throughout the property. Today, on a visit to Tres Estrellas, one can see perennials of all shapes and sizes planted as hedgerows, borders, windbreaks, silvopasture, and shade throughout the vegetable patch and animal pastures. The incorporation of perennials into the production system not only improves the overall health of the farm ecosystem, but also serves as an important teaching tool for the students that visit the farm. 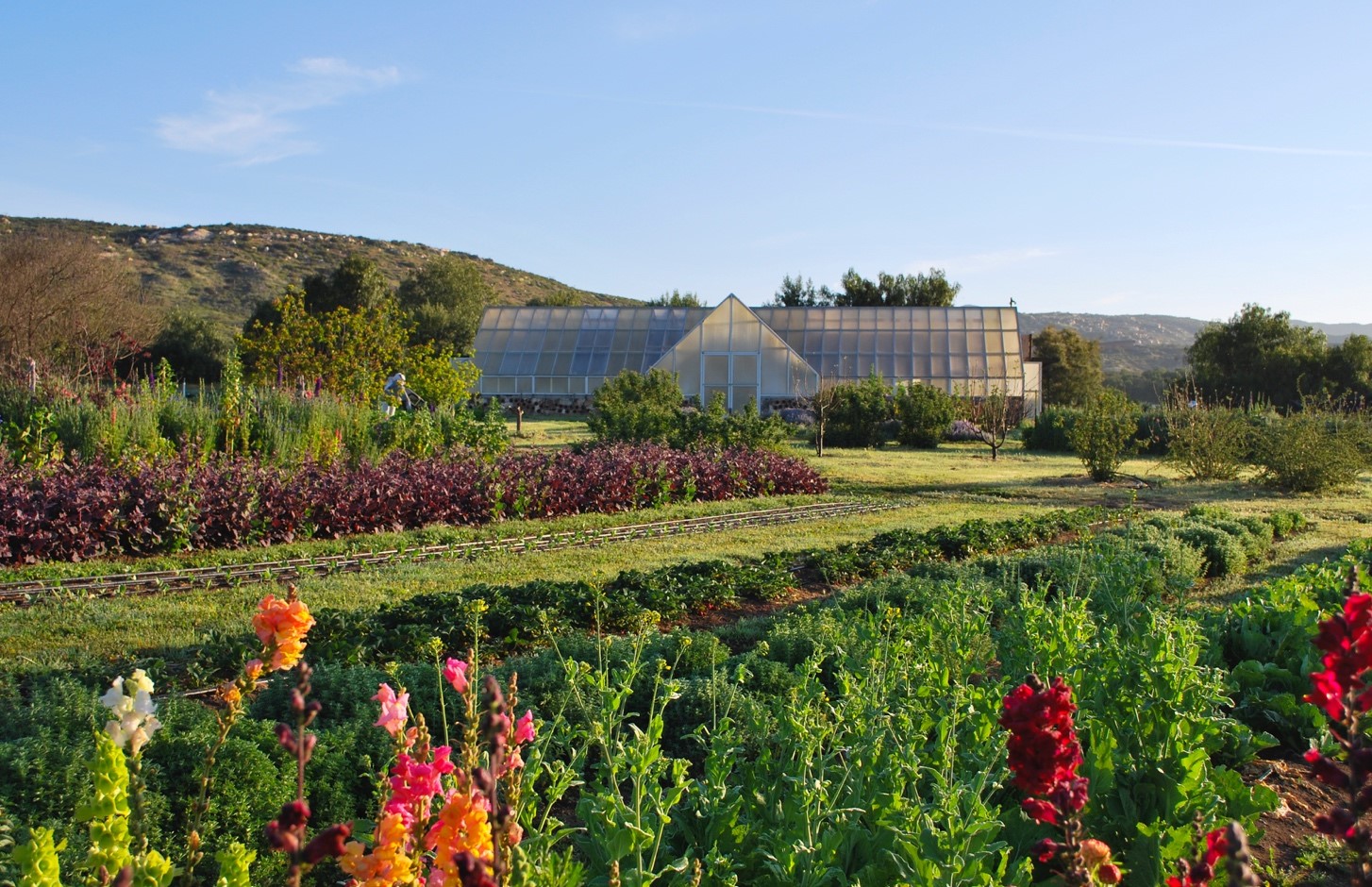 The primary vegetable patch on the farm is located on a Southeast facing slope, with the strongest winds of the year being the Santa Anas that arrive from the North in late fall. The farm is bordered by olive trees (Olea europaea) and natives such as laurel sumac (Malosma laurina) and black elderberry (Sambucus), and this border is the first line of defense against the damaging winds that blow every year. The hedgerows that run perpendicular throughout the vegetable patch consists of rosemary (Salvia Rosmarinus), lemon verbena (Aloysia citrodora), jujube (Ziziphus jujuba), olive (Olea europaea), Citrus, fig (Ficus carica) and quince (Cydonia oblonga). These hedgerows act as a second line of defense for the more fragile annuals intercropped amongst them. Aside from wind protection, the borders and hedgerows have many other benefits, including erosion control and native insect habitat. While the annual beds are being turned over consistently for vegetable production, the perennials offer a welcoming escape to the beneficial insects and critters that live on and pass through the farm. 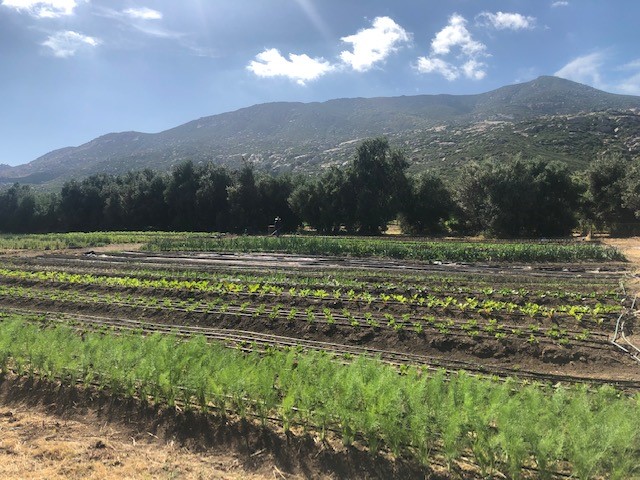 Raised vegetable beds situated below a windbreak of olive trees.

More recently, silvopasture areas have begun to be planted with trees such as laurel sumac (Malosma laurina), mesquite (Prosopis), palo verde (Parkinsonia) and peruvian pepper (Schinus mole). The newly introduced Nigerian Dwarf Goats, Alpine Goats and Dorper sheep graze the pastures that lie amongst the recently planted trees, providing them with protection from sun, wind and predators. Currently the pastures are a combination of native and introduced vegetation including giant wild rye (Leymus condensatus), many types of wild brassicas and alfalfa (Medicago sativa), however plans for the future include the introduction of additional native grasses. The multitude of benefits that spring from the managed grazing system include revitalized pasture, carbon sequestration and animal stress reduction and therefore production of higher quality milk and meat. 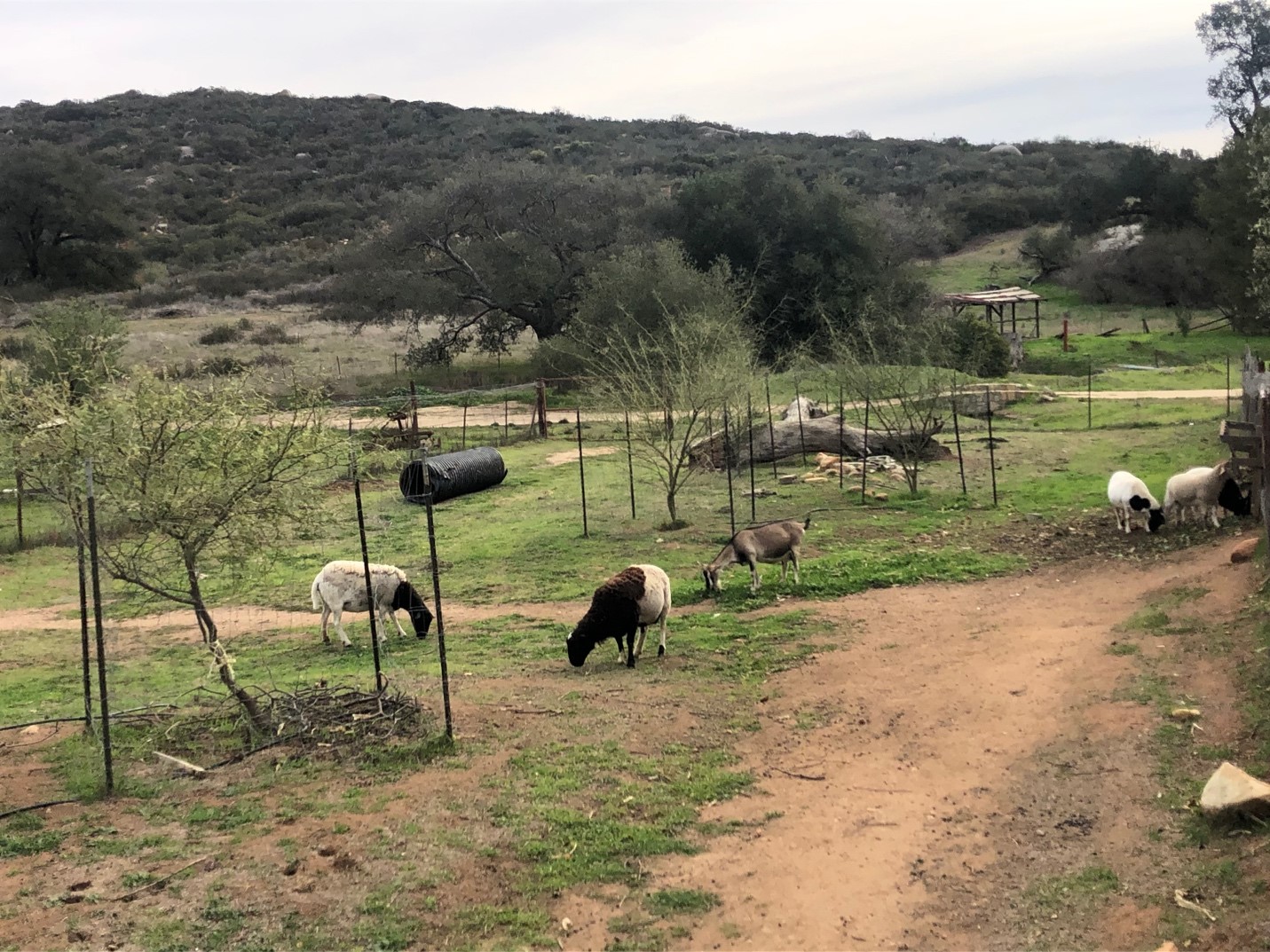 Over the past decade, I have had the privilege of visiting, working on, and studying various agricultural systems throughout the Americas, most of which incorporate agroforestry to a certain degree. The integration of annuals, perennials, pasture and livestock at Tres Estrellas provides one of the most inspirational, living examples of agroforestry that I have come across. From the experiences that I have lived and the lessons I have learned, I can say with confidence that I believe agroforestry is a crucial tool for the future if we are going to transition conventionally managed agricultural land to lands that support biodiversity, sequester large amounts of carbon and produce nutrient dense food for humans and animals. My time studying sustainable agriculture and agroforestry at CATIE in Costa Rica introduced me to the concept of agroforestry in a tropical context. After graduating, I went on to work for the University of Missouri Extension, where I collaborated frequently with the MU Center for Agroforestry, bringing agroforestry knowledge in a temperate context to local communities. Now, as I continue to explore the possibilities of incorporating agroforestry in a Mediterranean climate, I am constantly reminded that the benefits of agroforestry ripple far and wide throughout the world, and that nearly every production system, regardless of climate or geographic location, can be improved by the introduction of perennials.